In collaboration with Luís Arandas, the concept for a live video performance was developed to be played at 2018's edition of orbits music festival. Indentity-wise, orbits aimed to create an experience that connected with and respected nature (here is a review of the festival by monument magazine).

The festival took place in Oliveira do Hospital, Portugal. A place severely hit by the great forest fires of 2017. Using burnt wood to create the structures of the festival and by creating initiatives to replant native flora in the affected areas, the festival promoted the reconstruction of the region. This was an inspiration for the creation of nature related visuals. 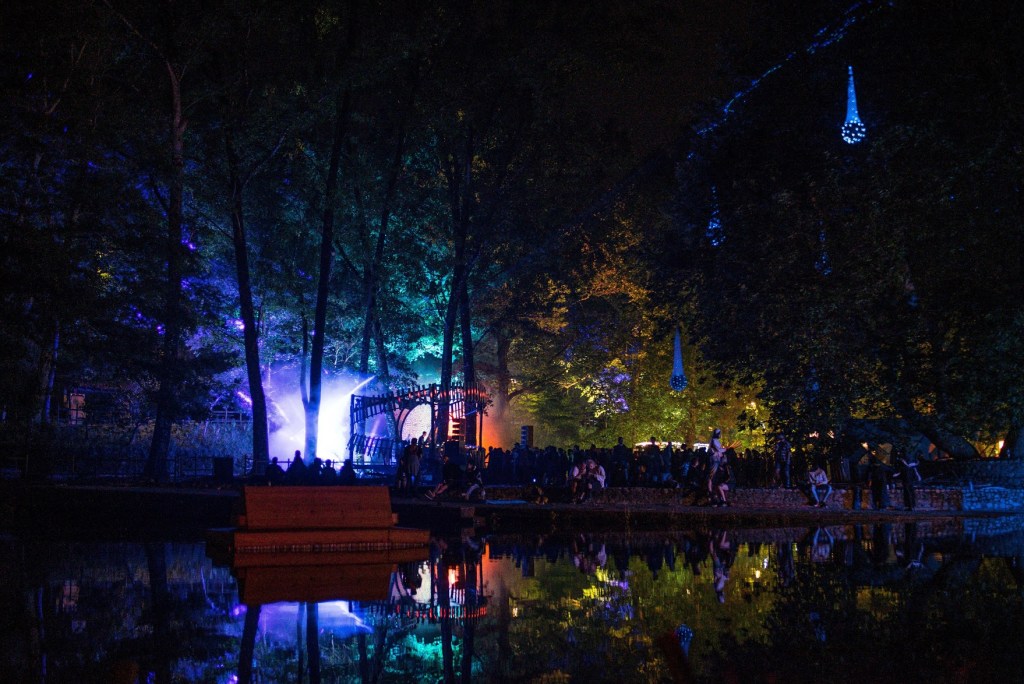 We developed a structure that would, with a microcontoller controlled stepper motor, rotate natural materials found on location. Collecting materials — tree bark, wood, foliage — was done during the festival days, taking inspiration from the surrounding experience and landscape. The usage of locally collected materials enhanced the connection to the physical space of the festival, elevating the visual component of the performances.­

A video composition of locally recorded footage was made to accompany the rotating materials. These recordings looked at macro and micro occurrences in the neighbouring nature spaces, showcasing both life and stilnness.

The rotating materials, filmed in real time, and the pre-composed nature footage, were processed through custom designed software. The final output was then fed into a projector and mapped onto the stage. A third component of synthesized elements, based on particle systems, created images that would go from rain-like visuals to emerging reaction-diffusion patterns.

A video of the festival experience. Footage was shot by Tiago Lêdo and the video edited by Luís Arandas.

An example of different visualizations possible. Given the performative nature of the system, these can vary greatly, allowing for an enhanced audiovisual experience.

Video composition of the nature elements recorded in situ.

Given the emphasis on the site-specific and nature related themes, using local materials seemed an appropriate choice. Thus began the design of the system that supported and rotated materials for video capture. A stand was designed with a stepper motor on top, so that the pieces stood elevated, facilitating the positioning of the camera.

The above video exemplifies the object rotating mechanism in operation. The rotation of the stepper motor was controlled by an arduino and a stepper motor driver. This construction allowed for a subdivision of the steps, resulting in more steps per revolution, sacrificing torque for resolution. Through the usage of a potentiometer, rotation speed was controllable. A switch allowed the rotation's direction to be changed, and a momentary toggle halted the rotation.

Images retrieved from the [festival's page](https://www.facebook.com/orbitspt) and [monument magazine's](https://mnmt.no/) website.